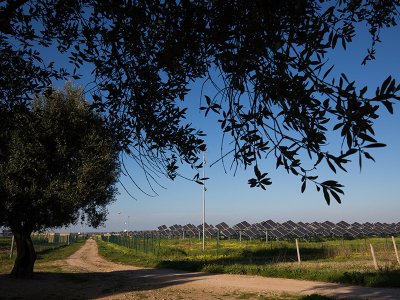 Global Solar Fund's interest in developing sustainable energy continues and is based on environmental respect and solidarity.

The results speak for themselves.
Since 2017 GSF has committed itself to the recovery of centuries-old olive trees in Puglia, in particular in Brindisi, in the land surrounding the photovoltaic parks, reaching the admirable figure of 769 recovered units and thus constituting a perfect mix responsible innovation and respect for the local naturalistic system.
To this GSF parallels its social commitment, to guarantee the founding ethical values of the company and to the continuous search for a way of public awareness for environmental respect.
GSF donates 200 litres of EVO oil to the SOS village of Ostuni, a facility that houses children from struggling families and mothers seeking help, as a sign of their closeness and identity, based not only on results but in particular on human commitment and the willingness to intervene responsibly on the social context.
GsF's solidarity is not simply to reflect the transparency of its work and the goodness of its actions. companies active in the area.
As a result, the company is exposed in full respect of its ideals, assuming on itself the social and cultural responsibility of a wise project, which aims to combine the financial results with human results and assumes a clear transparency in the development of the territory's potential.
For this reason, the company does not confine itself to a role of classic and traditional enterprise, but for itself thinks and works on an alternative growth path, originating from an essential attention to ethics in the strict sense, thus placing emphasis on the "how" we must act in respect of all social and economic components.

GSF's mission remains and continues to remain sustainability, to be achieved in full community involvement, for the construction of a future between energy eco-sustainability and social responsibility.